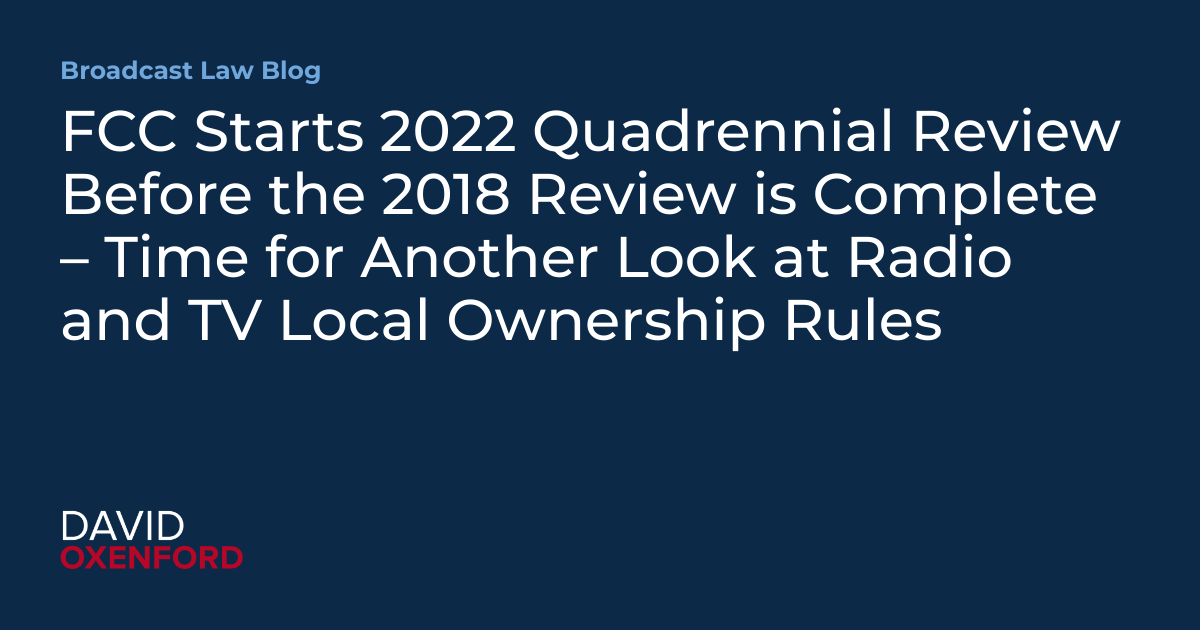 With the holidays upon us and the end of the year fast approaching, the FCC took care of one piece of business required by statute as it released a Public Notice announcing the start of the 2022 Quadrennial Review of the FCC’s ownership rules.  The FCC is required, once every four years, to review their local ownership rules to see if they remain in the public interest.  The Notice starts the review required for this year even though the 2018 review remains pending with seemingly little likelihood of any action as long as the FCC remains politically divided (currently two Republicans and two Democrats with one open seat).

So, unless the 2018 review is decided and finds that some existing rule is no longer in the public interest and abolishes it, the just announced new review (the “Quad,” as those in DC communications regulatory circles call it) will look at the same issues as the last one did.  Ownership rules governing the limits on radio ownership in each market, largely unchanged since they were first adopted in 1996, are probably the issue that could potentially affect the largest number of broadcasters (see our articles here and here on proposals for change in the radio ownership rules).  Also under review will be issues including the Dual Network Rule, which prohibits combinations of two of the Top 4 TV networks, and a possible clarification of the Top 4 rule on local TV ownership.  The Top 4 rule generally prohibits combinations of two of the Top 4 rated TV stations in any television market.  In 2017, the FCC voted to allow parties to seek a waiver of that prohibition.  Such waiver requests are evaluated on a case-by-case basis.  The proposal raised in the 2018 proceeding was to adopt some bright line tests as to when waivers would be permitted (e.g., allowing combinations of the two lowest rated stations if their audience share did not equal that of the first or second ranked station in the market).

The Notice announcing the start of the new Quad was not a detailed review of the broadcast ownership landscape, nor did it advance specific ownership changes that might be considered (see our article here on the Notice that started the 2018 review).  Instead, the Notice was relatively short, with no discussion of any specific proposals for regulatory change.  The Notice asks the public to provide information as to whether the current rules need to be changed to further the public interest and, if a party thinks that change is needed, to provide empirical evidence demonstrating why the change furthers the public interest.

The Notice does put forward a few questions on which the Commission seeks comments.  They ask about issues that have regularly been considered in the past, including whether technological change and the growth of new competitors (e.g., streaming) calls for a broader definition of the “market” in which broadcasters compete – potentially justifying a relaxation of the rules (see our articles here and here on the broadcast marketplace definition).  The Commission also asks how the rules affect ownership of broadcast stations by minorities and women – questions that have been raised in prior proceedings and were to a degree at the center of the Supreme Court review of the FCC’s 2017 ownership decision – a review that held up consideration of the 2018 Quad from 2019 through 2021.  But the Commission also asks what benefits consumers get from the rules – and how consumers would benefit from any changes that may be adopted.

FCC ownership rule changes are slow and controversial.  Even though the FCC considered abolition of the broadcast-newspaper cross-ownership rules from the early years of this century, the rules were not taken off the books until after the 2021 Supreme Court decision which upheld the 2017 FCC decision to abolish the cross-ownership restrictions (see our article here) – too late in the estimation of many to help the imperiled newspaper industry whose deterioration had been evident for years before the FCC acted.  Many have suggested that, given the growth of digital platforms and their increasing share of local audio and video audiences and their huge chunk of local advertising dollars (as we’ve written, taking over 50% of the local advertising revenue out of every rated market), the FCC needs to learn from the newspaper example and change broadcast ownership rules before it is too late.  We will see where the FCC’s latest proceeding leads – including whether it leads to the resolution of the issues raised in the still pending 2018 proceeding. Comments will be due 45 days after the Notice is published in the Federal Register and reply comments will be due 60 days after that Federal Register publication.